Immunosuppression in Kidney Transplant Programme and Paradigm shift to Tolerance

1.  Cellular and humoral mechanism in physiology, rejection and tolerance

The figure explains basic immunological behavior of lymphoid tissue toward self and non-self antigens during embryogenesis and in adult life. It also shows the mechanism of graft rejection and strategies of graft tolerance. 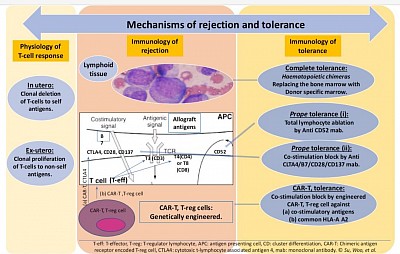 Mechanism of rejection and strategies of tolerance.

Transplant tolerance is defined as a state of donor-specific unresponsiveness to the allograft without a need for on going pharmacologic immunosuppression. These strategy could eliminate many of the adverse events associated with immunosuppressive medicines.

Two types of prope or partial tolerance are currently known.

1)Anti cancer therapy: Immune cells (T-regulator cells) from patient’s blood (i.e. Acute lymphobkastic leukemia) is drawn and equipped with a Chimeric Antigen Receptor (CAR-T). The antigen receptor is a genetically engineered receptor (mostly a monoclonal antibody against the antigen. The antigen is the target cell surface protein i.e. lymphoblastic cell surface antigen). The mRNA producing the mab is synthesized in laboratory. It is incorporated in a harmless virus used as vector. The virus containing the genetic sequence is then transfected in patient's T-reg cell. Thus T-reg cell is converted into a CAR-T cells. These cells are multiplied to a million count, and then transfused back to the patients blood stream. The CAR-T cells containng the mab get attached to the surface antigen of i.e. ALL cells, and destroy the cancer cells. The receptor binds itself to a specific protein on the cancer cell and activates the CAR-T cells to kill the cancer cells.

2) CAR-T therapy in transplant tolerance using Chimeric Antigen Receptor for regulatory T-cells (T-reg): When you can block Signal-2, there is T-cells anergy, and fail to induce graft rejection.

Signal-2 is known as Co-stimulatory signal: APC surface antigen B7-1 & 7-2 get attached to TCR CD28 (homologous to CTLA-4), of T-cell receptor. Upon this signal-2 activation, the lymphocyte, which could be either T-4 or T-8 cell, is activated when CD3 of the T-cells is activated by corresponding antigen of APC. The T-cell proliferation occurs, to cause graft rejection. Therefore, blocking signal-2 either by monoclonal antibody against CTLA-4 antigen or APC B-7 antigen, T-cell activation can be blocked and you get tolerance by so called T-cells anergy.

BENEFIT study used Belatecept (mab against B-7) for this purpose.

This mab can be delivered by CAR-T cell to the target cell antigen CTLA-4 on the surface of T-cells to block attachments with B-7 antigen of APC instead of iv Monoclonal antibody (Belatecept). Thus produce same kind of T-cell anergy producing tolerance. This is explained below:

Most recently, this research on CAR-T therapy targeting T-reg (regulatory T-cells) has been pioneered. The genetically engineered T-reg cells are aimed to block co-stimulatory signaling receptors as mentioned above. Thus blocks T-effector cell up-regulation. The readministered genetically engineered CAR-T-reg cells with receptor (mab) component for CTLA-4 antigen of T-cell as described above, blocks CTLA-4, making them unavailable for binding to B7 antigen of APC, resulting in absent co-stimulation, and thus induce T-cell anergy to CD-3, CD-4 and CD-8 lymphocytes. This is akin to induction of tolerance in organ transplant. This has been shown to be effective in skin, islet cell graft and has been speculated to be effective in inducing tolerance in renal and liver allograft (5).

Points for immunosuppresion for engraftment.

All protocols are summarized by the author of TK IMMUNOSUPPRESSIVE TRANSPLANT Protocols in the following images: 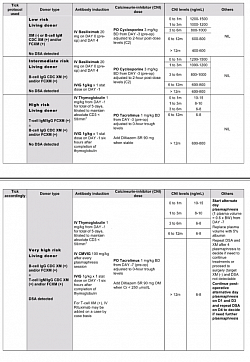 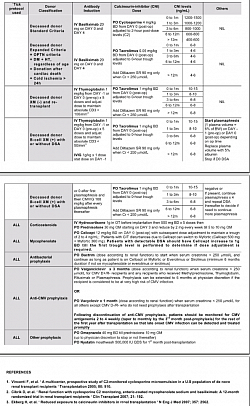 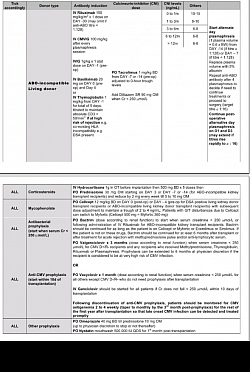