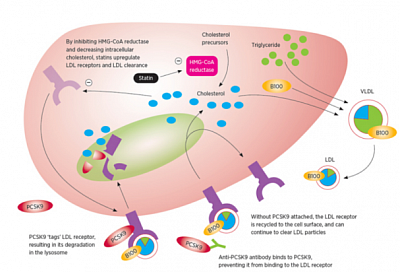 2)  Cardiovascular Events: to reduce the risk of myocardial infarction, stroke, and coronary revascularization.

Indicated as an adjunct to diet and other LDL-lowering therapies (eg, statins, ezetimibe, LDL apheresis) for the treatment of patients with homozygous familial hypercholesterolemia (HEFH)

Statins, which inhibit cholesterol biosynthesis, have both pleiotropic and Low-Density Lipoprotein (LDL)-lowering properties. Atorvastatin is one of the choices for the primary and secondary prevention of cardiovascular disease and management of hypercholesterolemia.

Warfarin, a coumarin derivative, produces an anticoagulant effect by interfering with the cyclic interconversion of vitamin K and its 2,3 epoxide (vitamin K epoxide). Vitamin K is a cofactor for the carboxylation of glutamate residues to γ-carboxyglutamates (Gla) on the N-terminal regions of vitamin K–dependent PROTEINS. These proteins, which include the coagulation factors II, VII, IX, and X, require γ-carboxylation by vitamin K for biological activity.

CyP450: the gene coding for cytochrome P450, the hepatic enzyme responsible for oxidative metabolism of the warfarin S-ISOMER. Several genetic polymorphisms in this enzyme have been described that are associated with lower dose requirements and higher bleeding complication rates compared with the wild-type enzyme CYP2C9.

NSAID & ASPIRIN: Drugs such as ASPIRIN, nonsteroidal antiinflammatory DRUGS, penicillins (in high doses), and moxolactam increase the risk of warfarin-associated bleeding by inhibiting platelet function. Of these, aspirin is the most important because of its widespread use and prolonged effect. Aspirin and nonsteroidal antiinflammatory drugs also can produce gastric erosions that increase the risk of upper gastrointestinal bleeding.

Antithrombotic action: The suggestion that the antithrombotic effect of warfarin is reflected in lower levels of prothrombin forms the basis for overlapping heparin with warfarin until the PT (INR) is prolonged into the therapeutic range during treatment of patients with thrombosis. Because the half-life of prothrombin is ≈60 to 72 hours, ≥4 days’ overlap is necessary.

Switching between apixaban and anticoagulants other than warfarin: Discontinue one being taken, and begin the other at the next scheduled dose.

Switching from warfarin to apixaban: Discontinue warfarin and initiate apixaban when INR <2.0

Prevention of clot formation within venous and arterial catheters Use 100 units/mL.

Mechanism of work: LMWH; antithrombotic, that inhibits factor Xa by increasing inhibition rate of clotting proteases that are activated by antithrombin III.

The product is available as a 2-mL multiple-dose vial containing 20,000 anti-factor Xa units of tinzaparin sodium per milliliter. The drug should be administered subcutaneously via a calibrated syringe once daily for at least six days until there is adequate anticoagulation with warfarin (an INR of at least 2 for two consecutive days). These recommendations are consistent with current treatment recommendations for acute DVT, which state that a minimum of five days of therapy with UFH or an LMWH should be provided while warfarin therapy is being adjusted to achieve an INR of 2-3.

4,500 anti-Xa IU given SC 12 hours before surgery and then once daily for as long as the patient is considered to be at risk of VTE.

4) Prevention of clotting in extracorporeal circuits during haemodialysis and haemofiltration in adults.

Duration of 4 hours or less:

Duration of more than 4 hours:

A bolus injection of 2,500 anti-Xa IU at the start of dialysis/filtration, followed by 750 anti-Xa IU/hour as a continuous infusion.

No interchangeability with other LMWHs, because of pharmacologic differences.

Use in patients with a creatinine clearance level < 30 ml/minute is not recommended, as dosage in this population has not been established. Available evidence demonstrates no accumulation in patients with creatinine clearance levels down to 20 ml/min. When required in these patients, tinzaparin sodium administration can be initiated with anti-Xa monitoring, if the benefit outweighs the risk (see section 4.4: Renal impairment).

• Hypersensitivity to the active substance or to any of the excipients listed in section 6.1.

• Active major haemorrhage or conditions predisposing to major haemorrhage. Major haemorrhage is defined as fulfilling any one of these three criteria: a) occurs in a critical area or organ (e.g. intracranial, intraspinal, intraocular, retroperitoneal, intra-articular or pericardial, intra-uterine or intramuscular with compartment syndrome), b) causes a fall in haemoglobin level of 20 g/L (1.24 mmol/L) or more, or c) leads to transfusion of 2 or more units of whole blood or red blood cells.