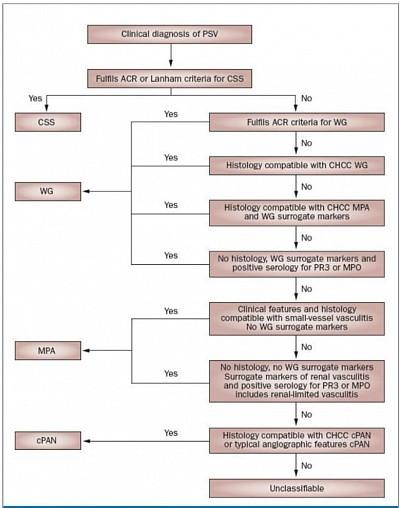 1. The EULAR and PRES Classification of Vasculitis

a) Granulomatous includes the following:

b) Nongranulomatous includes the following:

Other vasculitides includes the following: 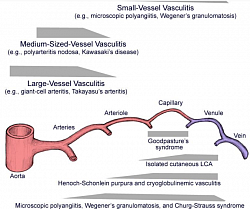 Primary Vasculitis classification (Picture de-classico): inflammation of blood vessels, causing wall thickening, stenosis, and occlusion with ischemia. Necrotizing inflammation that destroy segments of the wall. Vessels of any size of any organ system can involve. The disease depends on type of inflammation, the size of blood vessel segment, and the organ. Secondary vasculitis can result from other autoimmune disease, malignancy, allergies etc. ANCA are directed against granular and lysosomal constituents of neutrophils and monocytes. Two fluorescence pattern —a cytoplasmic ANCA (C-ANCA) and a perinuclear ANCA (P-ANCA) staining pattern. 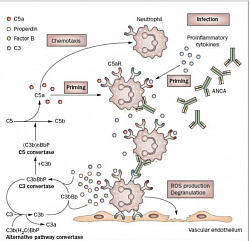 Cellular & complement pathways in AAV: ANCAs stimulate primed neutrophils to undergo a respiratory burst and degranulate. It directly damage the endothelium. It activates the alternative complement pathway with generation of the powerful C5a. C5a and the neutrophil C5aR amplifies ANCA-mediated neutrophil activation, results in necrotizing inflammation of the vessel. Also, according to their cytokine profile and function, CD4+ T helper (TH) cells were originally classified as TH1 or TH2 cells. TH1 cells mainly exert cellular immune responses, and TH2 cells inhibit TH1 responses and participate in humoral immunity. A shift in the TH1-TH2 balance, from a TH1 response to a TH2 response, causes progression of generalized WG.

Saddle nose of Wagener Granulomatosis Currently known as Granulomatosis with polyangiitis (GPA). Granulomatous vasculitis that involves the sinopulmonary system but can involve any organ system. Presenting features may include purpuric rash, recurrent sinusitis, epistaxis, shortness of breath, and/or hemoptysis from alveolar hemorrhage and necrotizing glomerulonephritis with significant renal impairment, have a positive ANCA finding in 90% of cases, (c-ANCA, or anti-PR3). 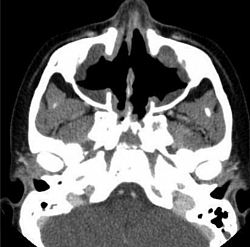 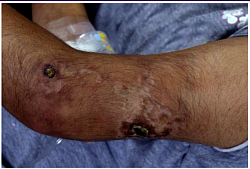 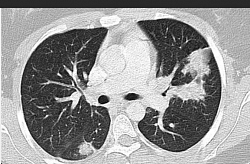 Eosinophilic infiltration results in multiorgan involvement, including neuropathy and cardiovascular disease (pericarditis). ANCA positivity is seen in approximately 40% of patients, usually with an “atypical” or “indeterminate” pattern. 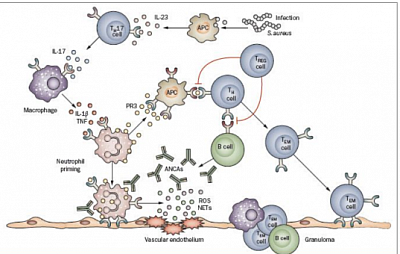 ANCA-mediated neutrophil activation induces the generation of neutrophil extracellular traps (NETs) containing PR3 and MPO. NETs have several pathogenic roles in AAV—they can adhere to the endothelium causing damage, and they might also activate plasmacytoid dendritic cells and B cells to produce interferon and ANCAs, respectively

Classification criteria:angiographic abnormalities (conventional, CT, or MRI) of the aorta or its main branches (mandatory criterion), plus at least one of the following features: Decreased peripheral artery pulse and/or claudication of extremities. Blood pressure difference of more than 10 mm Hg. Bruits over aorta and/or its major branches. Hypertension (related to childhood normative data)

Classification criteria for Henoch-Schönlein purpura include palpable purpura (mandatory criterion) in the presence of at least one of following 4 features:

involves vessels of all sizes. The diagnosis is made clinically in patients with recurrent oral ulcers who also have recurrent genital ulcers, uveitis, various skin lesions, and/or a positive pathergy test.

is a type of vasculitis caused by deposition of anti-GBM antibodies in small vessels of lungs and kidneys. Goodpasture syndrome clinically manifests with rapidly progressive glomerulonephritis and/or pulmonary hemorrhage (pulmonary renal syndrome).

ANCA antibodies are directed towards cytoplasmic proteins within neutrophils and monocytes (eg, PR3, MPO), which may also be expressed at the cell surface, particularly on stimulated cells. In vitro studies have shown that ANCA IgGs can directly activate neutrophils and monocytes by both Fc receptor engagement and direct Fab2 binding to antigen. These activated cells interact with endothelial cells via adhesion molecules and release inflammatory mediators, such as toxic granule enzymes and reactive oxygen metabolites that cause apoptosis and necrosis. In addition, anti-MPO IgG may activate MPO itself triggering an oxidative burst and resulting in severe endothelial damage. ANCA-activated neutrophils may release factors that activate the alternative complemen.

HLA genes located on the short arm of chromosome 6, which are also associated with many autoimmune diseases.  HLA-DPB1*0401,  HLA-DR4 and HLA-DR13(6) are associated with WG.  HLA-DRB4 might be a genetic risk factor for CSS,  and  HLA-DRB1*0901 to be associated with MPA.

Silica dust exposure is associated with a variety of autoimmune disorders, including AAV, which is thought to evoke an immune response and inflammatory reactions. Accelerated apoptosis of polymorphonuclear leukocytes and macrophages might act as a trigger in the development of AAV. Silica can activate alveolar macrophages, stimulate lymphocytes, attract neutrophils, and induce inflammation and activation of fibroblasts. MPO released by neutrophils is taken up by alveolar macrophages and presented to immunocompetent cells, resulting in the development of anti-MPO autoantibodies.

Bacterial infections have been associated with the initiation and relapse of WG. Among these bacteria, S. aureus seems to have the strongest association with WG. Superantigens from S. aureus might stimulate B cells and T cells, leading to AAV development. In addition, cell-wall components of S. aureus might polyclonally activate B cells, which results in the persistent expression of ANCAs. Another hypothesis is that S. aureus might directly prime neutrophils, which leads to membrane expression of PR3; primed neutrophils can be fully activated by anti-PR3 autoantibodies, resulting in respiratory burst and degranulation with induction of tissue damage.

A variety of drugs can cause AAV, including propyl-thiouracil (the most common cause of drug-induced AAV), hydralazine, D-penicillamine and minocycline.  It is thought that MPO might undergo structural change following interaction with propylthiouracil and could then stimulate T cells to activate B-cell production of ANCAs. In addition, drugs such as sulfasalazine induce neutrophil apoptosis, which can promote autoantibody production by increasing expression of ANCA target antigens on the surface of apoptotic neutrophils.

Cyclic polypeptide that suppresses some humoral activity. As an alkylating agent, the mechanism of action of the active metabolites may involve cross-linking of DNA, which may interfere with growth of normal and neoplastic cells.

Two formulations are available and are not interchangeable. The original formulation, mycophenolate mofetil (MMF, Cellcept) is a prodrug that once hydrolyzed in vivo, releases the active moiety mycophenolic acid.

Chimeric IgG1-kappa monoclonal antibody directed against the CD20 antigen found on the surface of normal and malignant B lymphocytes. The Fab domain binds to CD20 antigen on B lymphocytes, and the Fc domain recruits immune effector functions to mediate B-cell lysis in vitro. Possible mechanisms of cell lysis include complement-dependent cytotoxicity (CDC) and antibody-dependent cell-mediated cytotoxicity (ADCC).

These agents provide immediate and long-term treatment of vascular thrombosis.

Augments activity of antithrombin III and prevents conversion of fibrinogen to fibrin. Does not actively lyse but is able to inhibit further thrombogenesis. Prevents reaccumulation of clot after spontaneous fibrinolysis.

Provide as continuous heparin infusion to maintain aPTT at 1.5 times the control.

Low molecular weight heparin. Augments activity of antithrombin III and prevents conversion of fibrinogen to fibrin. Does not actively lyse but is able to inhibit further thrombogenesis. Prevents reaccumulation of clot after spontaneous fibrinolysis.

Advantages include intermittent dosing and decreased requirement for monitoring. Heparin anti–factor Xa levels may be obtained if needed to establish adequate dosing. 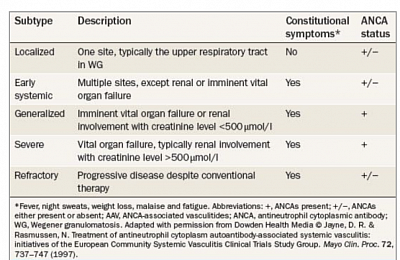 BUN, creatinine, liver enzyme levels may be abnormal, depending on involvement.

Urine studies for hematuria and/or proteinuria are indicated.

PR3-ANCA and MPO-ANCA positivity have a high sensitivity and specificity for the diagnosis of GPA and microscopic polyangiitis (MPA), respectively.

The association of Churg-Strauss syndrome and ANCA positivity is approximately 40%.

Angiography (CT, MR, conventional) of the aorta and its main branches is indicated when investigating for Takayasu arteritis.

Electrocardiography – To identify signs of myocarditis or pericarditis

Electroencephalogram – In patients with CNS involvement

Bronchoscopy/lavage – May be required in patients with lung involvement

Tissue biopsy may be necessary to confirm a diagnosis of vasculitis in systemic and cutaneous polyarteritis nodosa (PAN), ANCA vasculitides, childhood PACNS, and infrequently in Henoch-Schönlein purpura. 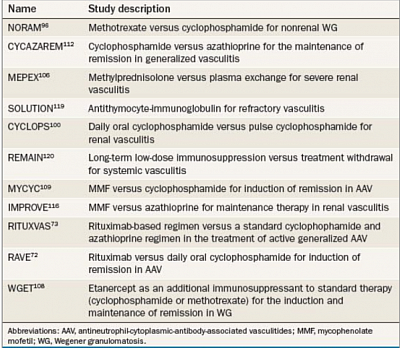 Advances in the Treatment of AAV: The prognosis of untreated AAV is very poor. Major clinical trials in AAV.

The cornerstone of treatment for AAV is corticosteroids in combination with daily oral cyclophosphamide, which has improved the prognosis of patients with AAV dramatically; approximately 90% of patients on this regimen achieve remission. Patients with AAV are treated according to the stage and activity of the disease.

Long-term use of oral cyclophosphamide is associated with severe adverse effects, including secondary infection, bone marrow suppression, hemorrhagic cystitis and bladder carcinoma. Trimethoprim-sulfamethoxazole is recommended for prophylaxis of Pneumocystis jiroveci infection during oral cyclophosphamide treatment. Incidence of bladder cancer after first exposure to cyclophosphamide was 5% at 10 years and 16% at 15 years. To obviate this alternative immunosuppressive regimens, such as methotrexate, intravenous cyclophosphamide and rituximab, have been used in major studies.

NORAM study, was initiated by EUVAS

Induction of Remission in Generalized AAV.

A randomized controlled trial by EUVAS, compared pulse cyclophosphamide with daily oral cyclophosphamide for the induction of remission of AAV.  Relapses were more frequent following pulse therapy than oral therapy, although the study was not powered to detect significant differences in relapse rate; therefore, oral cyclophosphamide can still be considered for use in patients with AAV who experience frequent relapses.

has been tested in open-label clinical trials for the treatment of patients with AAV, with a range of remission rates from 70% to 100%. Randomized controlled trials of rituximab for induction of remission in AAV include the RITUXVAS and RAVE studies.

Other Agents in AAV:

WGET (Wegener's Granulomatosis Etanercept trial), etanercept was used as an additional therapy to the standard regimen (glucocorticoids plus cyclophosphamide or methotrexate) for the induction and maintenance of remission. no significant difference between the two groups at 27 months of follow-up. Solid cancers developed in six patients in the etanercept group, as compared with no such malignancies in the control group.

Etanercept, therefore, is considered ineffective when added to standard therapy for induction and maintenance of remission in WG.

comparing mycophenolate mofetil (MMF) versus cyclophosphamide for induction of remission in AAV, has been initiated.

Maintenance of Remission of AAV

Although there are remission, relapses in AAV are associated with subsequent progression to end-stage renal disease.  Maintenance therapy is crucial to reduce relapses once remission is achieved.

CYCAZAREM study by EUVAS
Either azathioprine (2 mg/kg per day; n = 71) or to continue taking cyclophosphamide (1.5 mg/kg per day; n = 73).
Both treatment groups continued to receive prednisolone (7.5 mg per day),suggesting that azathioprine is as effective as cyclophosphamide for maintaining remission in AAV. Adverse events were comparable between the two treatment groups.

French Vasculitis Study
Patients with WG or MPA were randomly assigned to receive either oral azathioprine (2 mg/kg per day; n = 63) or methotrexate (0.3 mg/kg per week, progressively increased to 25 mg per week; n = 63) for 12 months after induction therapy. No significant difference was found between the two groups in terms of relapse-free survival and toxicity at a follow-up period of 29 ± 13 months.

WG RCT
WG after remission, with cyclophosphamide and prednisolone, were randomly assigned oral leflunomide (30 mg per day) or oral methotrexate (starting with 7.5 mg per week and reaching 20 mg per week after 8 weeks) for 2 years. Leflunomide was more effective in preventing relapses than oral methotrexate but higher rate of adverse events. However, this study was underpowered.