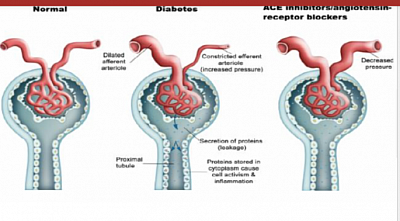 Use maximum tolerable dose. If high K is a problem, use anti high-K-medicine and continue ACEI or ARB.

Non-steroidal - new agent in phase 3 trial. This can be used in low dose with ACEI or ARB. Hyperkalaemia may be a limiting factor.

3. Aliskerin - Renin antagonist. Do not use it in CKD-3. Contraindicated because of fatal hyperkalaemia. It can be used in NON-CKD cases of hypertension with eGFR >60.

4. BP control, lipid control and DM control need to be optimized according to the guidelines.

8. Ascorbic acid - is metabolized to oxalate. This way Vitamin C and citrus fruits can fasten CKD progression. Avoid these in your patients.

Statin - Atorvastatin has been shown to reduce endothelial dysfunction in CKD. Use it in hyperlipidemia.Allopurinol - by it's non-xanthine oxidase inhibition action. It inhibits lipid peroxidase (produces oxygen radicals), thus inhibit oxidative stress. Reduces CKD progression. If you get hyperuricemia by lab results, use it. Not much evidence to support this notion. Need further RCTs.Notes on allopurinol & HLA-B*58-01

In Chinese, Thai & Korean, Allopurinol associated drug reaction has been closely associated with HLA-B*58-01, (80-85% in positive cases while only 15_20% in negative cases). HLA-B*58-01 is common in these population than rest of Asian and European population. HLA-B*58-01 genotyping (a codominant allele) could considerably reduce the occurrence of allopurinol-induced SCARs (severe cutaneous allergic reactions) and related deaths. Cost-effectiveness analysis of treating patients with chronic gout (without additional risk factors like CKD3) in Singapore and in Portugal found that HLA-B*58:01-guided ULT (urate lowering therapy) was not cost-effective at this time.

A large study of cardiovascular events in gout patients taking one of two medications to prevent excess build-up of uric acid has found that one of the drugs, febuxostat (Uloric, Takeda), increased the risk of death for those with heart disease compared with the other drug, allopurinol. Yet the two drugs were comparable with respect to a combination of nonfatal heart attack, nonfatal stroke, urgent surgery to treat angina, and death due to cardiovascular causes.

FDA advisory to use with informed consent in patients who are allergic to allopurinol.

10. FGF23 (optimization of CKD renal bone metabolism) - hyperphosphatemia from CKD is associated with upregulation of Fibroblast Growth Factor (FGF23) from renal paranchyma, also known as phosphaturic hormone. FGF23 is important in embryogenesis responsible for the fibrous tissue in the developing fetus. In CKD upregulation of it could contribute to progressive fibrosis. Control of hyperphosphatemia therefore is important in retardation of progression of CKD. Optimization of phosphate binders and vitamin D are required.

ii. Sevelamer hydrochloride (a resin that chelate phosphate. Also chelate lipids, drugs vitamins and other trace elements, as such needs caution for other concomitant medication use).

iii. Magnesium hydroxide and Magnesium Carbonate, singly or in combinations of Calcium carbonate or acetate.

a) Vitamin D, if level of serum 25(OH) Cholecalciferol is less than 25.

d) Paracalcitriol and doxarcalciferol: these agents binds to vitamin D receptor of PTH secreting cler cells of parathyroid gland, but do not have the action on calcium absorption.

Reference talk is in Section B no 30.

(Quotes from this link about Etelcalcetide): In dialysis patients who cannot take cinacalcet because of vomiting, its derivative peptide Etelcalcetide IV triweekly is used. In 2016, etelcalcetide was introduced for the treatment of secondary HPT. The peptide etelcalcetide directly agonizes the CaSR, thereby reducing circulating levels of PTH and subsequently calcium (ref). By means of a triweekly bolus injection of the drug, a sufficient plasma level of the drug is attained, enabling the administration during dialysis. This makes drug adherence easier for the ESRD patient. Etelcalcetide has been compared to both placebo as to its precursor cinacalcet (ref). 50% of the patients who received etelcalcetide showed a decrease of PTH levels to ⩽32 pmol/L. Etelcalcetide was expected to give less side effects as vomiting and diarrhea since it is administrated intravenously and thus bypasses the gastrointestinal tract. Unfortunately, no significant difference in side effects was found when comparing etelcalcetide with cinacalcet, probably due to PTH-receptors in the intestinal tract. A 30% decrease of FGF-23 levels was seen in 80% of the patients using etelcalcetide after 27 weeks. Studies investigating the long-term effects of etelcalcetide on mineral bone disease, overall survival, and cardiovascular events are not available yet. The costs of etelcalcetide are significantly higher than its precursor cinacalcet. Therefore, etelcalcetide should be used as a second in line treatment option, in patients unresponsive to oral calcimimetics or for those patients who fail to adhere properly. Etelcalcetide, like cinacalcet, is only registered for the treatment of dialysis patients, not for those who received a kidney transplant. 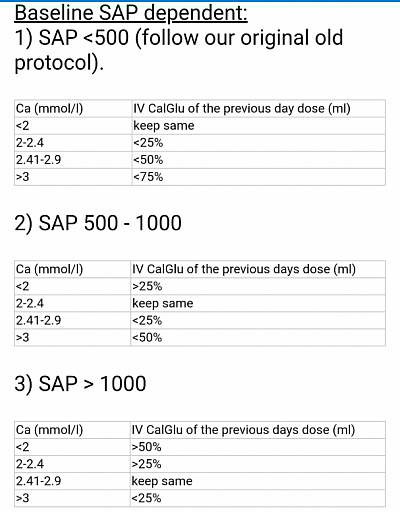 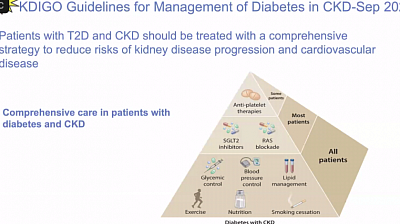 Amylin is a peptide co-secreted with insulin and is deficient in diabetes. Its actions are complementary to insulin in regulating plasma glucose. Amylin reduces postprandial glucagon.

Pramlintide - Amilin analog is given as an injection with insulin. Dose adjustment for pramlintide are not required in the presence of mild-to-moderate renal failure.

Careful blood pressure control is needed to prevent the progression of diabetic nephropathy and other complications; however the optimal lower limit for systolic blood pressure is unclear. In the UKPDS, a 12% risk reduction in diabetic complications was found with each 10 mm Hg drop in systolic pressure, the lowest risk being associated with a systolic pressure below 120 mm Hg. SPRINT study showed similar result in all, but at the expense of increased incidence of hypotension and mortality.

Both DM1 & DM2 are characterized by the appearance of microalbuminuria, which leads to overt proteinuria and progressive loss of GFR. A series of renal biopsy samples from patients with type 2 DM and proteinuria revealed that a significant proportion of these patients had glomerular lesions other than the classic lesions associated with type 1 diabetic nephropathy.

Two studies (the Reduction of Endpoints in NIDDM with the Angiotensin II Antagonist Losartan [RENAAL] Study and the Irbesartan Diabetic Nephropathy Trial [IDNT]) demonstrated that angiotensin II receptor blockers (ARBs) are superior to conventional therapy and amlodipine in slowing the progression of overt nephropathy.

All of you agree that the combination is not good. ON-TARGET and NEPHRON-D studies showed that.

Avosentan: Endothelin antagonists have demonstrated antifibrotic, anti-inflammatory, and antiproteinuric effects in experimental studies. It reduces proteinuria and BP when added to ACEI or ARB. 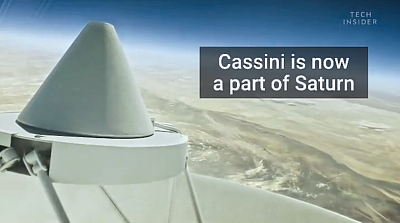 The pills cannot heal unless you go extra miles with patient education for life long diseases. Go to the following link, and let your patient toggle it anywhere anytime lifelong.
2. Food- the other important thing that goes through mouth othe then drugs, is food. Must be careful. Common items may have problem with kidney issues.
3.  Lifestyle care - kidney is vulnerable to many other factors pertaining to lifestyle. Patient needs to be aware of it.
_____________________________________